Ludum Dare results: these curtains are really on fire

The Ludum Dare compo is a game jam with more than 700 participants.

Based on previous results, I expected to be in the top 100 for some of the categories, maybe even 15th for one of them. Turns out that was the case, I reached 15th place. At least. For all categories. And second place overall. Wow. 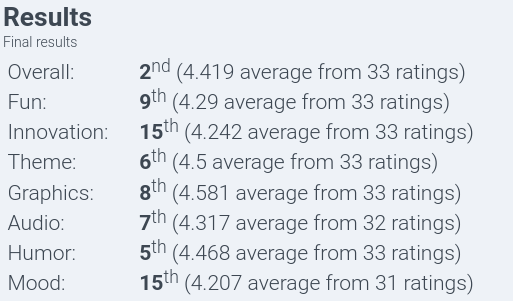 So how did it got there?

Currently there is a bug on the web version: you can't move the dog in fullscreen. That likely comes from the engine. I'm waiting for Godot (heh) version 3.4 to reupload a bug-free version, with the rest of the expansion.

Ideally, I wish to finish the game for Christmas, but nothing is guaranteed.

This is a normal morning for Old Roger.